I love people watching and it is not I engage people in conversation can I learn their story and we all know, everyone has a story.

I was taking my morning walk along the beach when I passed a young couple who were walking hand in hand so as I passed I said “good morning” and they responded simultaneously like wise.

They both had tears in their eyes and I guessed they were talking through a difficult discussion as a couple. I continued on and eventually arrived back at the pavilion sitting at a table facing the Gulf of Mexico.

A few minuets later the same couple walked up to the pavilion and sat down. They were still crying when the young man walked to his car and to retrieve some tissue for them both. I felt a little uncomfortable so I decided to leave them alone, so I began packing away my laptop and grabbed my cup of coffee.  When the young man arrived back at the table handed the tissues to the young woman and stated, “here you go Sis”.

Just before I stood to walk towards my car, I felt I should at least ask if they were ok. When I asked, they both stated they would be ok and they had walked the beach as their father asked them, when they received a phone call from their family explaining their father had died in the local hospital.

Their father became ill a week earlier and family flew in from around the US, and he was transferred to hospice care. They both had been by their father’s side since arriving three days earlier.

The young woman explains how they were able to speak with their father since arriving and he asked them many times to take a walk along the beach and earlier that morning he again asked when he woke.

So after three days by their father bedside, the two who are brother and sister drove to the beach and walked along to relax, when they received a call advising them their father had passed. We talked for a short while and they eventually returned to the hospital.

My earlier judgement believing they were a couple was way off, only to discover they were brother and sister with an ailing father who passed away while they were walking the beach as he asked them to.

See, everyone has a story. 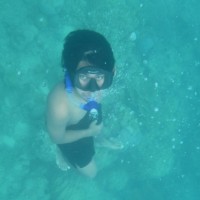 "because truth is stranger than fiction"

Parenting and more, optimized for Happiness.

let me ride through the wide-open country that I love...

Avid adventurer, travel blogger, and experience seeker. Starting each morning with a desire to see the world through a different lens.

A Barbarian in Gentlemen's Clothing

Manhood is a Journey